What He Wrote On His Test Had This Student Going Viral For All The Right Reasons….

You can witness rivalry everywhere. It’s common in business, sports, and various organizations. Of course, schools are no exception. That’s where we learn to compete from an early age. While competition makes us perform better at certain tasks, it hardly ever teaches us to help others.

So it’s surprising to see instances where kids choose to be kind to others instead of working hard to be the best. One of those kids is a student of Winston Lee.

Winston Lee is a history teacher teaching 11th-graders at Letcher County Central High School in Whitesburg, Kentucky. While he was marking one of the scripts for a history exam on World War 2, a note written below the multiple-choice answers caught his eye.

In the note, the student wrote, “If you could, can you give my bonus points to whoever scores the lowest?” 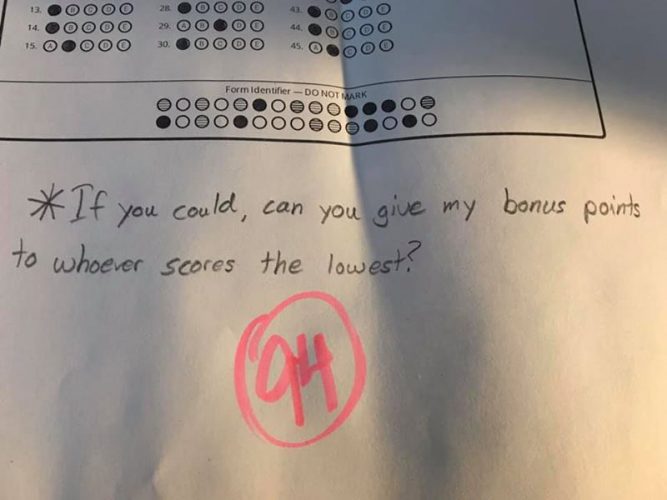 The student had gained five bonus points from participating in an exam review game the day before the test. With those five points, his test score would have increased from 94 percent to 99 percent.

“The guy is awesome,” Lee said. “We’ve had huge political debates in class this year (we keep it friendly), and my man always has some awesome, intelligent input.”

“Have to shout this out. Had honestly never seen this…One of my guys, a straight A+ guy, offers up his 5 bonus points to someone in need. Anyone. Totally offering up what is rightfully his, his earning, to any peer that may have been struggling especially hard the day of the test.”

“He didn’t care if he considered them a friend, didn’t care if they were cool, didn’t matter to him what situation had caused them to score lower, he just wanted to help, be kind, commit a loving act” he added in his Facebook post.” This note gave me so much hope. Let us all be a little more like this young man!!” Lee wrote in his post.

As the post went viral, social media has been abuzz with reactions.

A user wrote, “Good intention, but as a teacher, no one else will get this extra credit. Sorry just study harder that’s it….”

Another wrote, “Wow now this brings joy to the heart. Youth caring about his fellow classmates.”

A post read, “The world needs more kids like this. “Okay humanity wins this round…special thanks for posting” a user remarked.

Talking to the media, the Kentucky teacher said that he was not surprised by this request despite being a first. The teacher also said that he is the type of kid that would often show compassion in the classroom. Lee said that the student who got the bonus points from him was very thankful. That student did not know from who where did these bonus points come.

The Kentucky teacher also added in his blog post that many students from his school come from low-income households and have to face difficult circumstances. He also added that they never fail to amaze him. He further added that he was touched by the class XI student’s gesture.