She Is Facing Decades In Jail For Killing The Man Who Raped Her….

Roxana Ruiz, a single mother, has had to fight for herself every day to ensure her child’s safety and well-being. And despite being only twenty-one years old, Roxana has endured more pain and suffering than most adults twice her age.

However, the single mother’s life was turned upside down when a man broke into her home and raped her on May 8 in Nezahualcóyotl, Mexico, and that’s not the worst of all, in killing the man who raped her, Roxana Ruiz even faces 60 years in Jail!

The most devastating part of our life is we thought we have suffered enough, as for Ruiz, being a single mother is enough. There’s already an emotional challenge that single mothers go through, they often go through such difficulties in order to survive and to give a bright future for their children. However, some cruel things happened, and little did Ruiz know that her life will suffer more.

The horrifying incident happened on a night when Ruiz got off from her work, in a letter to the feminist collective Nos Queremos Vivas Neza, Ruiz explained her side of the story. Ruiz explained that a woman who worked at a neighboring pub asked her to join her for a drink as she was leaving work at a potato stand. Cruz, a regular at the pub, offered to bring her back to the apartment she shared with her four-year-old kid as she was leaving.

Upon reaching the residence, Cruz insisted that she allow him to stay the night there because he lived far away.

“He was being stubborn when we arrived. He obligated me to allow him in. He insisted that he lived too far, to allow him to sleep in my room, he insisted so much that he scared me, as an idiot I accepted,” Ruiz said.

Ruiz said she placed a blanket on the floor for Cruz to sleep on. Moments later, Cruz got on top of Ruiz’s bed.

“He started to remove the clothes (,) he beat me, he raped me, I was in shock, I just wanted to defend myself,” she said.

Now in court, the single mother admitted to killing Sinai Cruz, the man who had raped her, after he had finished abusing her inside her home.

After killing Sinai Cruz, Roxana Ruiz wrote a letter in which she confesses, “Maybe I should have let my attacker get away with it, go away and maybe leave me dead or injured so as not to have to live what I’m living.”

The single mother strangled the man who sexually assaulted her inside her home, despite the fact that many believe she acted in self-defense, but Mexican law enforcement detained her and charged her with murder. As a result, she is now facing sixty years in prison in Mexico.

Ruiz claimed that she hit Cruz on the nose at one point. Cruz warned Ruiz, ‘now you are really going to die.’ as he began to bleed. 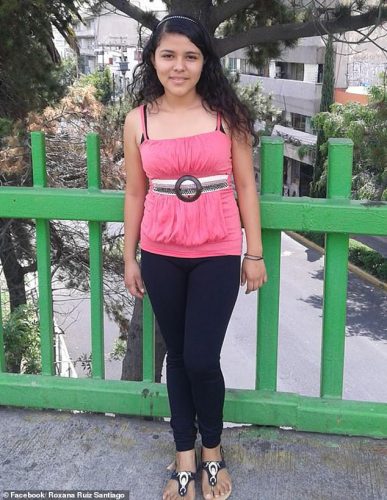 Cruz pummeled Ruiz, but when he lost focus, Ruiz wrapped a t-shirt over his neck and choked him to death.

“I strangled him, I felt fear, terror, I didn’t want him to hurt anyone else, I felt lonely, denigrated, I felt worthless, I felt it was all my fault for having trusted those people,” Ruiz said.

However, on May 8, 2021, Mexican authorities apprehended Ruiz after she killed her rapist. Authorities charged her with homicide, and she is due in court soon. She is expected to appear before a judge, during her scheduled appearance and if this single mother is convicted of murdering her rapist, she faces a sentence of thirty to sixty years in prison.

And after telling authorities that she killed Sinai Cruz because he allegedly raped her, Roxana Ruiz alleges that Nezahualcóyotl, State of Mexico, officials failed to request a medical examination.

“They did not take my statement into account so that I could defend myself. My only crime was defending myself from the man who raped me,” Ruiz wrote.