HATEFUL: Decades Old Statue Of Jesus Has Been Toppled And Beheaded…

Amid calls by leftists to tear down American and Christian statues, a 90-year-old statue of Jesus at St Patrick’s Cathedral in Texas lost his head. The vandal attacked and beheaded the statute during open prayer at the El Paso Church.

Though there is currently no known motive, radicals have explicitly called for attacks on Jesus, calling his likeness “white supremacy.”

The statue of the Sacred Heart of Jesus, which was located in the center behind the main altar of the church, was attacked at around 10 am when the church was open for private prayer. It was toppled and beheaded in a clear act of aggression against Christians. 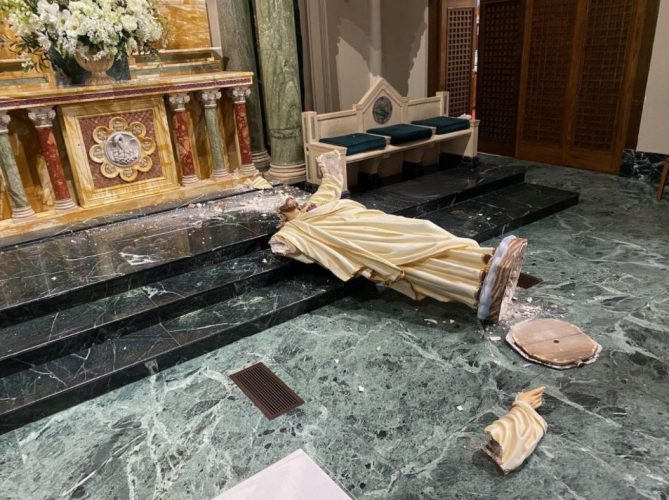 The cathedral also shared the news about the attack on social media, writing:

“We are saddened to announce the vandalism at St. Patrick Cathedral earlier today. The Cathedral was vandalized this morning at around 10:00 am. A suspect came into the sanctuary at St. Patrick Cathedral and destroyed the almost 90-year-old statue of the Sacred Heart of Jesus, which was located in the center behind the main altar of the church. The church was open and available for prayer. A suspect has been detained by the El Paso Police department. The police are currently continuing their investigation into the vandalism.”

The Cathedral, in El Paso, Texas, was open for prayer at the time of the vandalism. This welcoming gesture that allows people to seek a solemn space to pray was viewed as an invitation to destroy an important fixture in the church.

Bishop Seitz expressed the importance of the Sacred Heart of Jesus statue.

“This statue is one of my favorite representations of Jesus—his arms open wide in welcome, his heart aflame with love for us,” he said in the Instagram post below. “I would often take inspiration from this image as I prepared for Mass.” 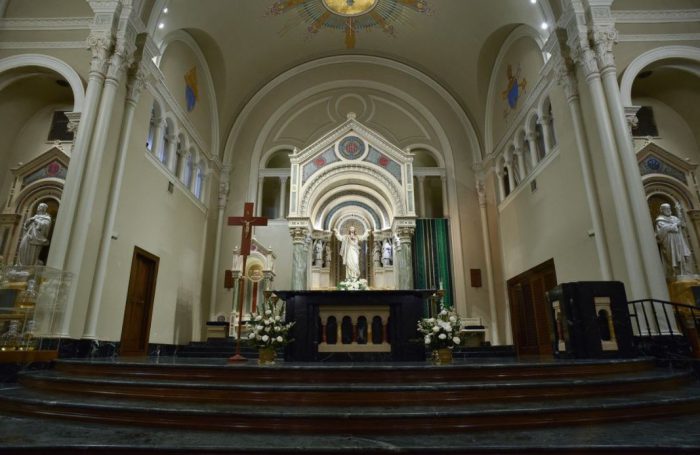 According to AWM, the post also featured a comment from the Rector of St. Patrick Cathedral, Fr. Trini Fuentes, who said, “I am in shock, and we at the Cathedral are heartbroken over such an unexpected situation.”

“As sad as I am to see a statue attacked and destroyed, I am grateful that it was not a living person,” Bishop Seitz added. “But a statue, particularly this statue, concretizes and connects us to persons and ideals that are not visible to our eyes. They reveal to us realities that are close to us but unseen.

“At this point, we do not know anything about the person who carried out this assault, but he certainly must be a person who is greatly disturbed to have attacked this peaceful place in our city and this image of the King of Peace. I hope this might be the impetus for him to receive the help he needs. He will be in my prayers,” Bishop Seitz added.

“I am devastated at this irreplaceable loss as I know members of this parish community and the whole Church of El Paso will be. At this moment, we will reach out in confidence to the One this statue represented, and I know he will console us,” Bishop Seitz concluded.

The police later identified the man allegedly responsible for the vandalism as 30-year-old Isaiah Cantrell, who has been charged with criminal mischief and possession of marijuana. He was brought into the El Paso County Detention Facility.

We are now in an era when churches can’t even have their doors open for prayer without being subject to vandalism.

Statues have been targets of left-wing activists all summer. Democrat Mayors have tolerated mobs of people ripping down statues they disagree with and now, they are going after Jesus.

The Sacred Heart of Jesus Statue sat front and center on the altar of St. Patrick’s in El Paso, Texas. It is an incredibly recognizable focal point. Unfortunately, its placement made it a target.

The Diocese of El Paso tweeted a picture of the statue on the altar. While the exact year is unknown, it was taken between 1925-1930.